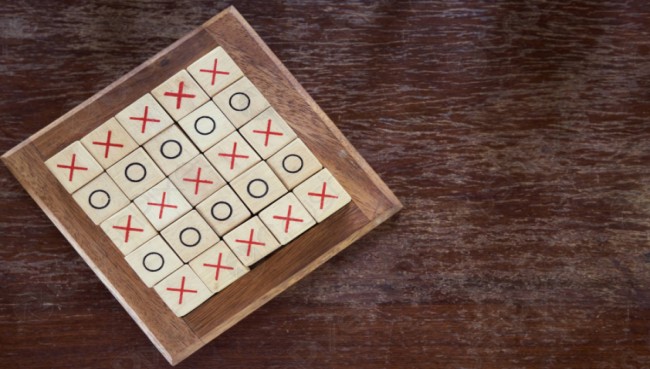 Note that we separate the history of the name from the actual game because those aren’t one and the same. First, let’s start with the game. Some ascribe the origin of Tic-Tac-Toe to the ancient Egyptians, but the most concrete ancient record we have of the game is from the Romans, and the game they referred to as terni lapilli, or three pebbles at a time.

With this said, the game wasn’t necessarily identical to how we play today. Rather than writing down markings, it’s believed that the Romans would use tokens, pieces, or pebbles, and move them around the grid to represent the different moves.

Much like today, you could see terni lapilli grids scrabbled all around ancient Roman cities. How the game progressed beyond that is a bit more unclear. Some say there are records of it being played in the Middle Ages, with a mystic attachment to it, but the most concrete reappearance we have of it comes sometime later.

In the 18th century in England, record of a children’s game close to Tic-Tac-Toe as we know it first appeared. While there isn’t a concrete understanding of what happened next, most likely the game was passed onto American and other international shores via England’s history of colonization and immigration